As we enter 2018, we would like to provide you with an overview of financial market results from the past 12 months, and to offer insights into some of the investment themes that may influence your investment portfolio over the coming year.

Several inquiries have come in concerning the current valuations of markets, where we are in the market cycle, and how to tackle current issues like NAFTA, interest rates, and tax reform. For this year’s outlook, we decided on a more visual approach and we hope that the graphics below will provide some guidance on these issues.

You will quickly notice that there are both optimistic and pessimistic charts. This was done purposely to provide a balanced view of the present investment landscape. Capital markets are complex and there are many data points to consider. Unfortunately, the situation cannot be simply summed up as “good” or “bad.”

Please feel free to contact us for elaboration on anything discussed in our newsletter. 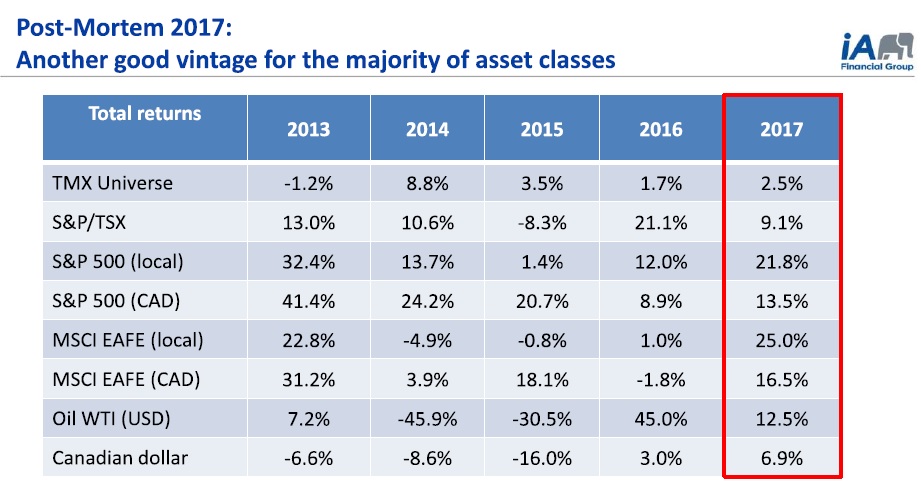 #3: Also from TD Wealth, below is a summary of the opportunities and risks weighing on markets.

#4: NAFTA Renegotiation Scenarios. Courtesy of RBC GAM, this table plots four possible outcomes to the NAFTA talks and the potential impact on the North American economy. 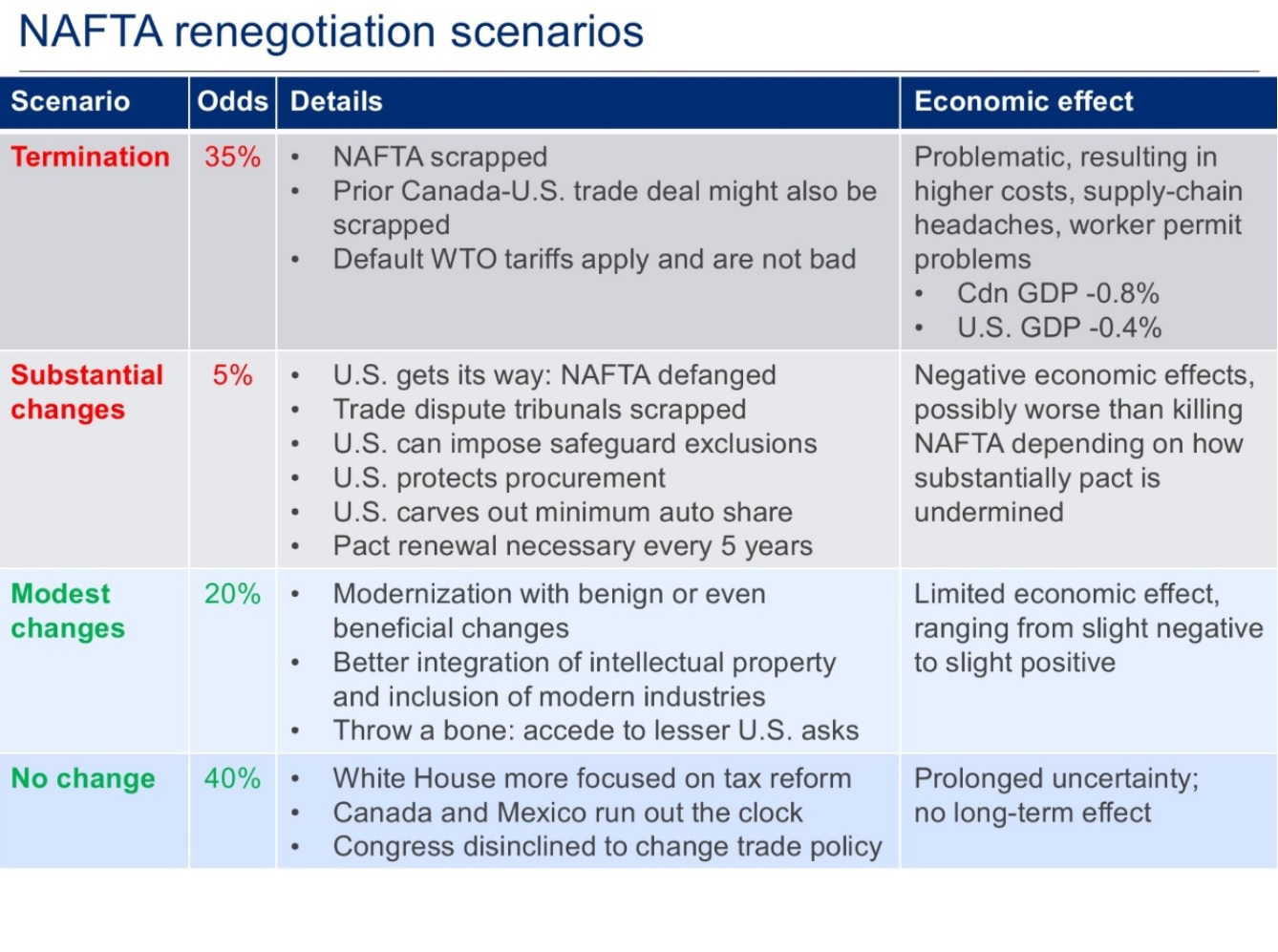 #5: Also from RBC GAM, a table summarizing the impact of Trump’s proposed tax reform plan. The key takeaway is that markets have already “priced in” the positive impact of the tax 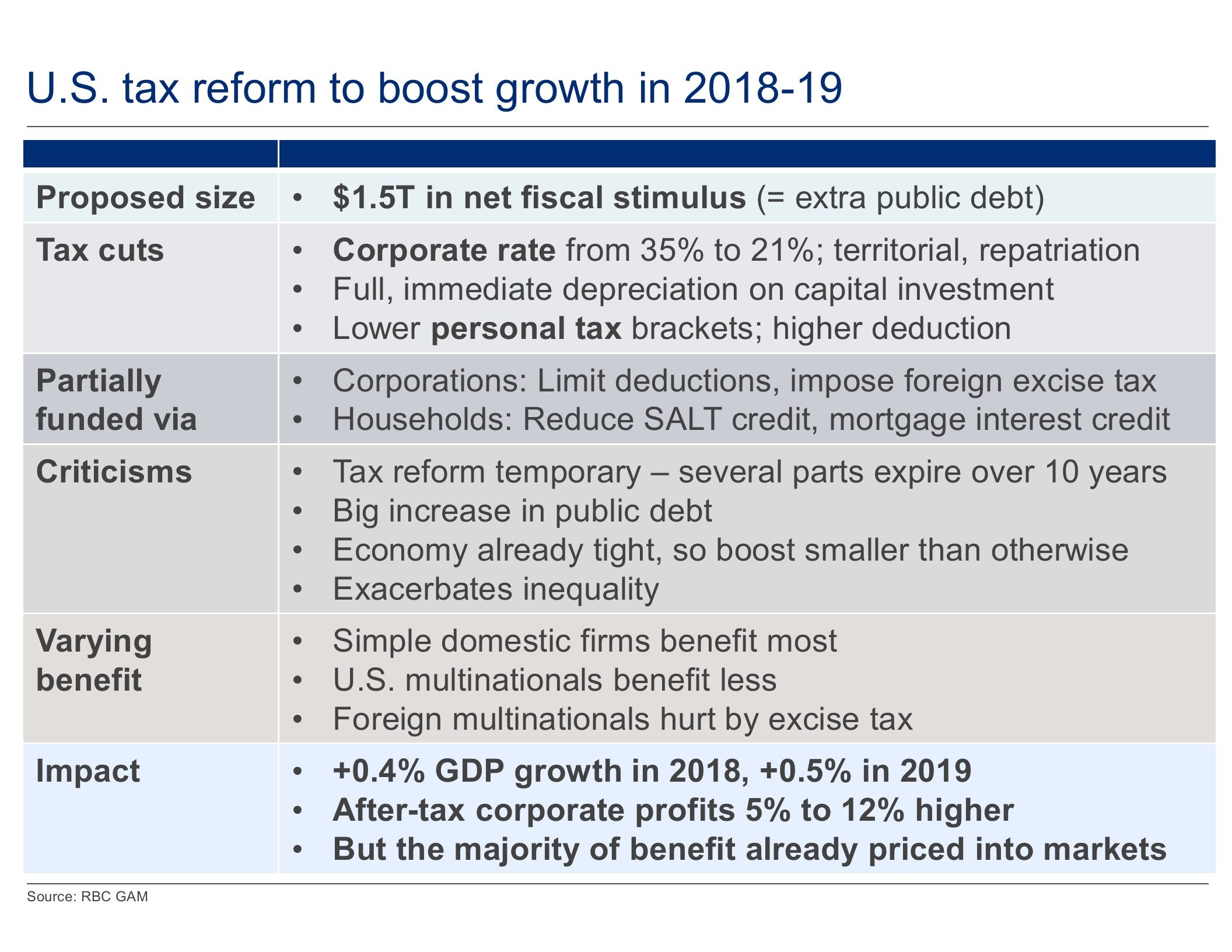 #6: How does the current bull market compare to previous ones? Since 1929, the S&P 500 has had 10 market corrections (defined as a 20 per cent drop or more). The last correction was the global financial crisis in 2008. Markets bottomed out in March 2009 and we have been in a bull market since. From both a duration and return standpoint, this is the second longest bull market on record.

Also note that the average length of a bear market is only 24 months compared to 54 months for a bull market.

#7: How expensive is the U.S. market? If the previous slide provided you with cause for concern, this one is reason for optimism. Despite a 295% run-up since March 2009, the S&P 500 is not as expensive as you might believe. Price/Earnings (P/E = current stock price over the predicted next annual earnings period) is a very basic market valuation metric. The 25-year average P/E for the S&P 500 has been 16x and the current P/E is 18.2x. 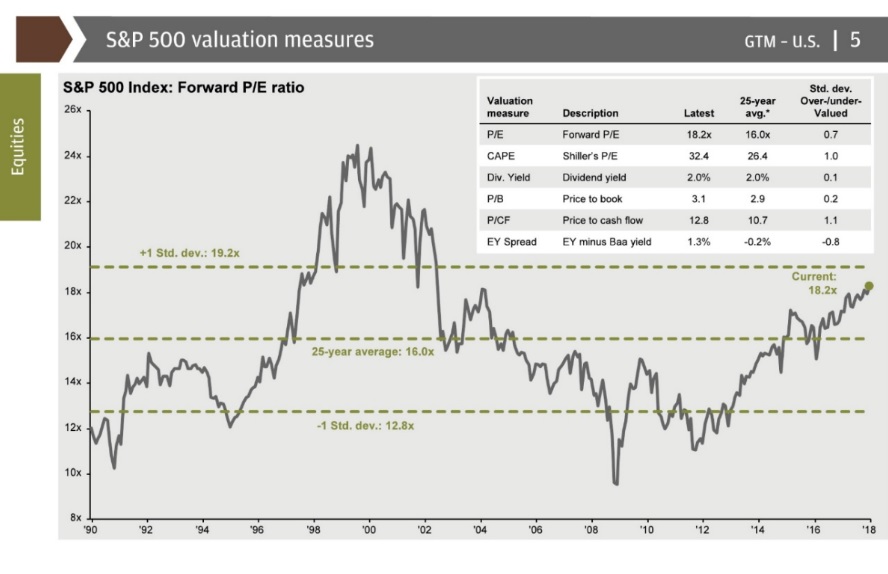 #8: Consumer Confidence and the Stock Market. This is the investor psychology chart. Notice how peak consumer confidence tends to precede a recession? The time to invest is when we’re anxious about markets. The time to stay put is when we’re euphoric about them. 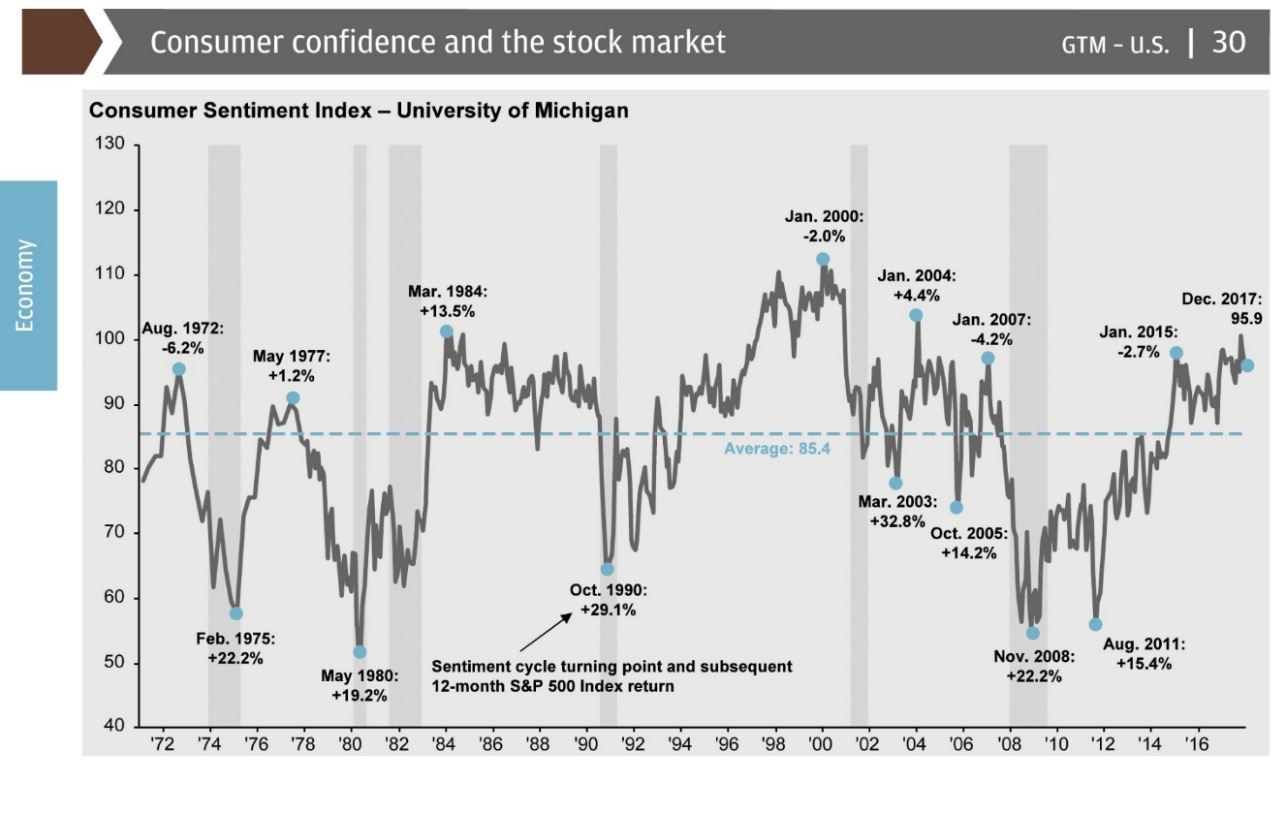 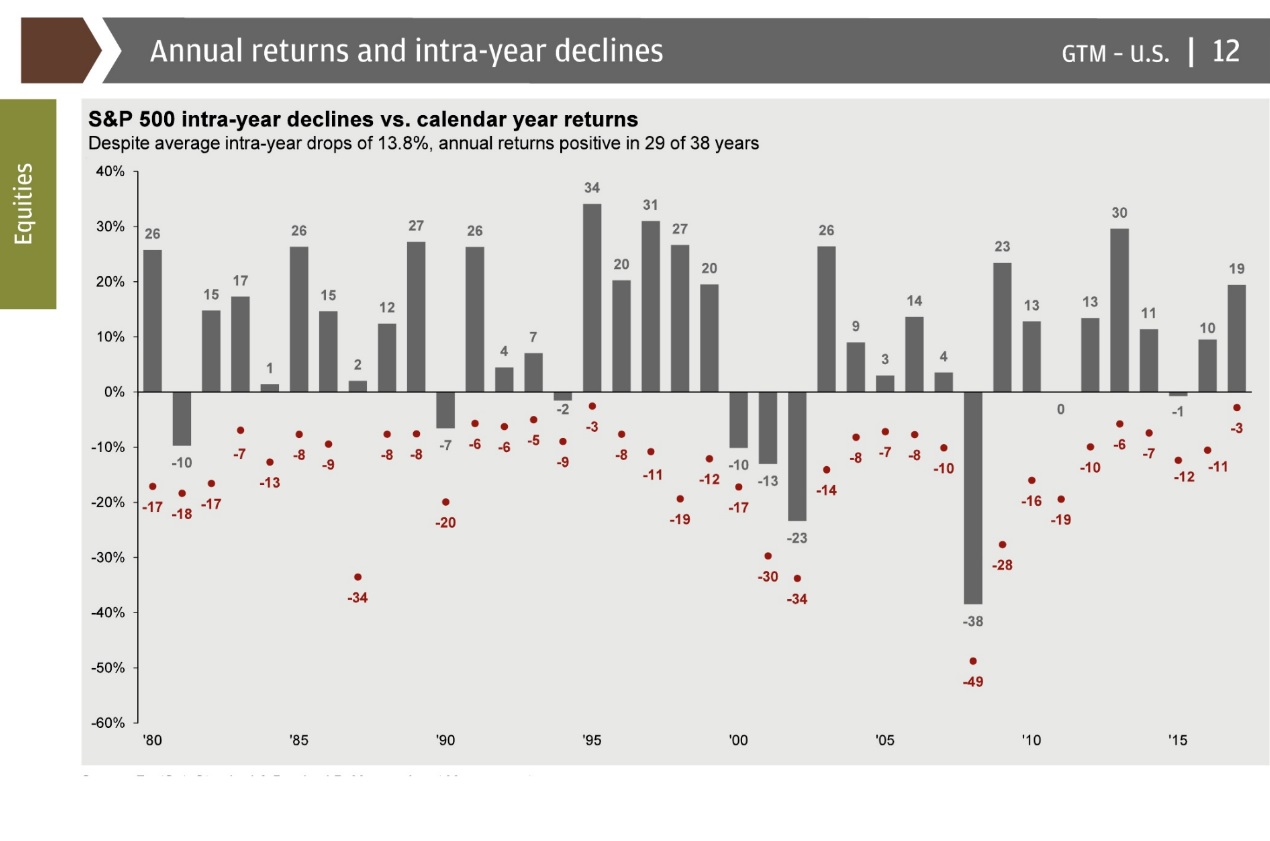 #10: Canadian and U.S. debt ratios and the labour market. Canadian households are more indebted than the U.S., but our labour market is healthier.

#11: Cryptomania. The meteoric rise of cryptocurrencies. The Crix cryptocurrency index grew by 38x in less than a year. Most analysts have defined this growth as a classic bubble, eclipsing all previous historical bubbles like the Nasdaq in the 90s, Gold Spot in the 70s and 80s, the Nikkei in the 70s and 80s, and even the Tulip bubble of the 1630s!

We were going to warn against trying to purchase into such a speculative asset class, but it seems the market has done this for us. As of the time of writing, the index has fallen 35% from its high on January 7. 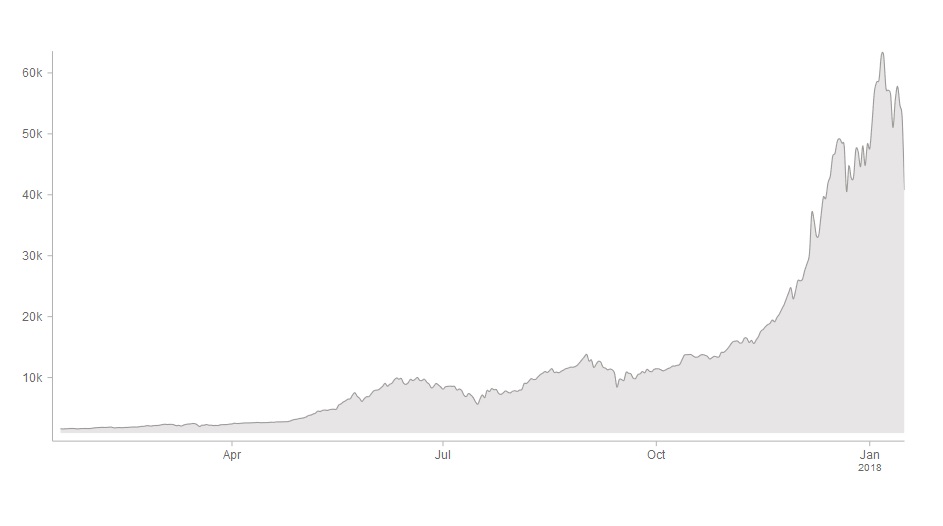 #12: Impact of a 1% Rise in interest rates: On January 17, the Bank of Canada increased its key interest rate by 0.25% for the third time in six months. When rates rise, bond prices fall. The chart below plots the impact of a 1% rise in rates. It assumes a parallel shift (every part of the yield curve moves by 1%). UST stands for U.S. Treasuries (U.S. Government Bonds). 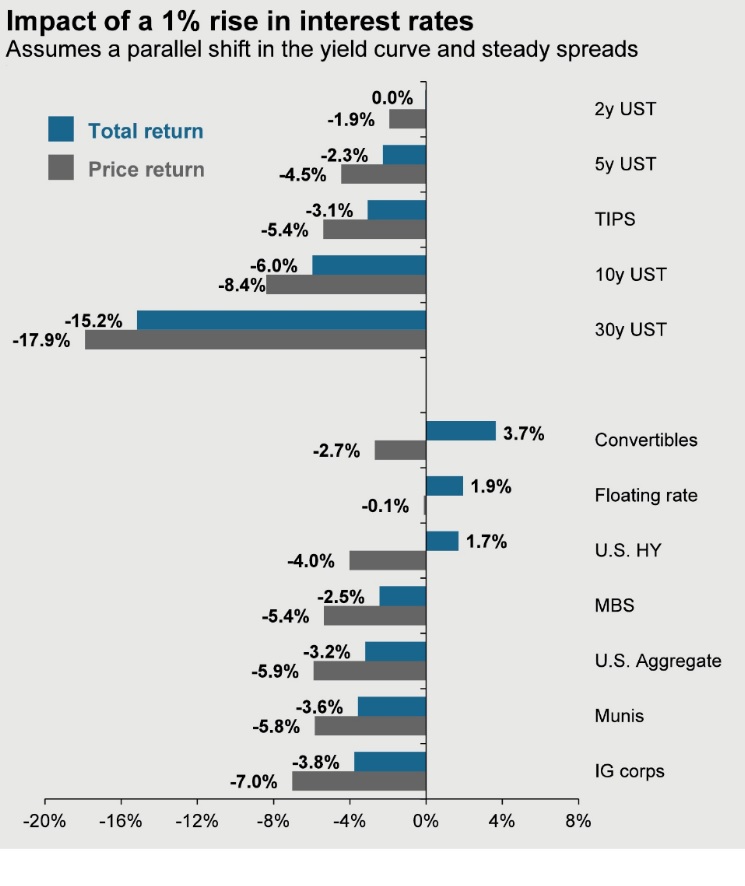 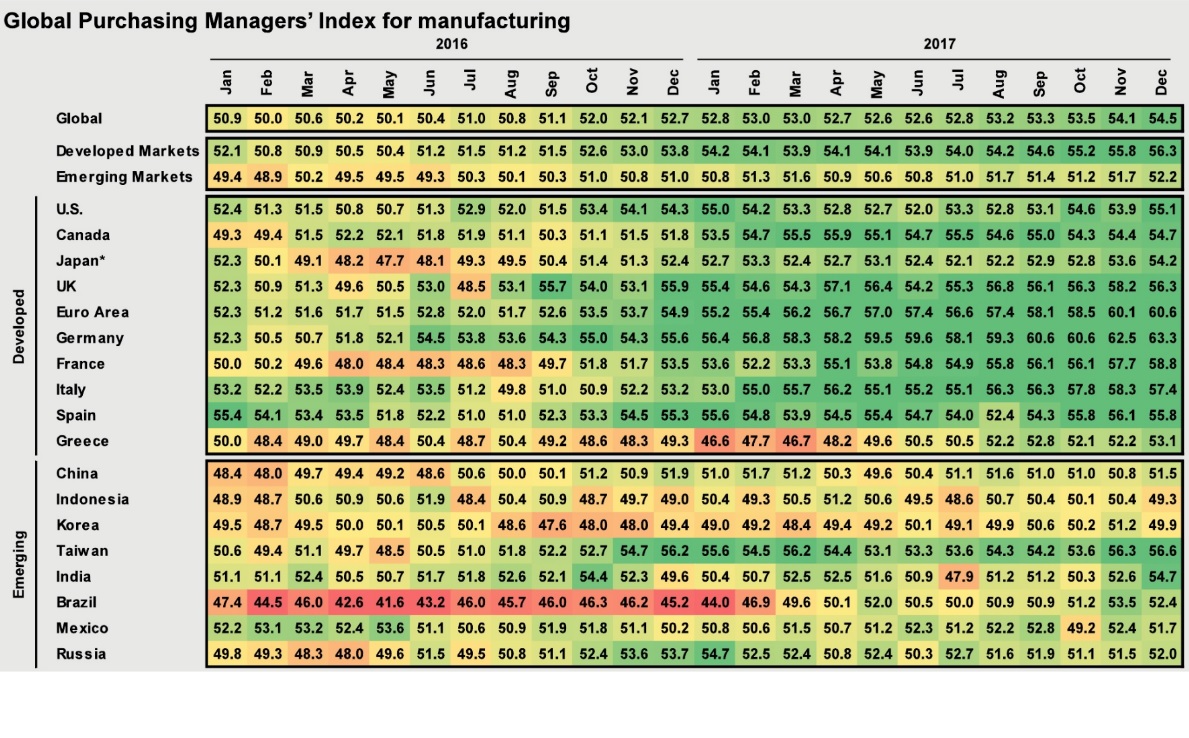 #14: Finally, the “what do I make of all this?” chart. Diversification and asset allocation are terms used endlessly in our industry, but that’s because they work. The preceding 13 charts have shown that there is both positive and negative data and it is near impossible to make (successful) big bets or major tactical changes on a year to year basis. 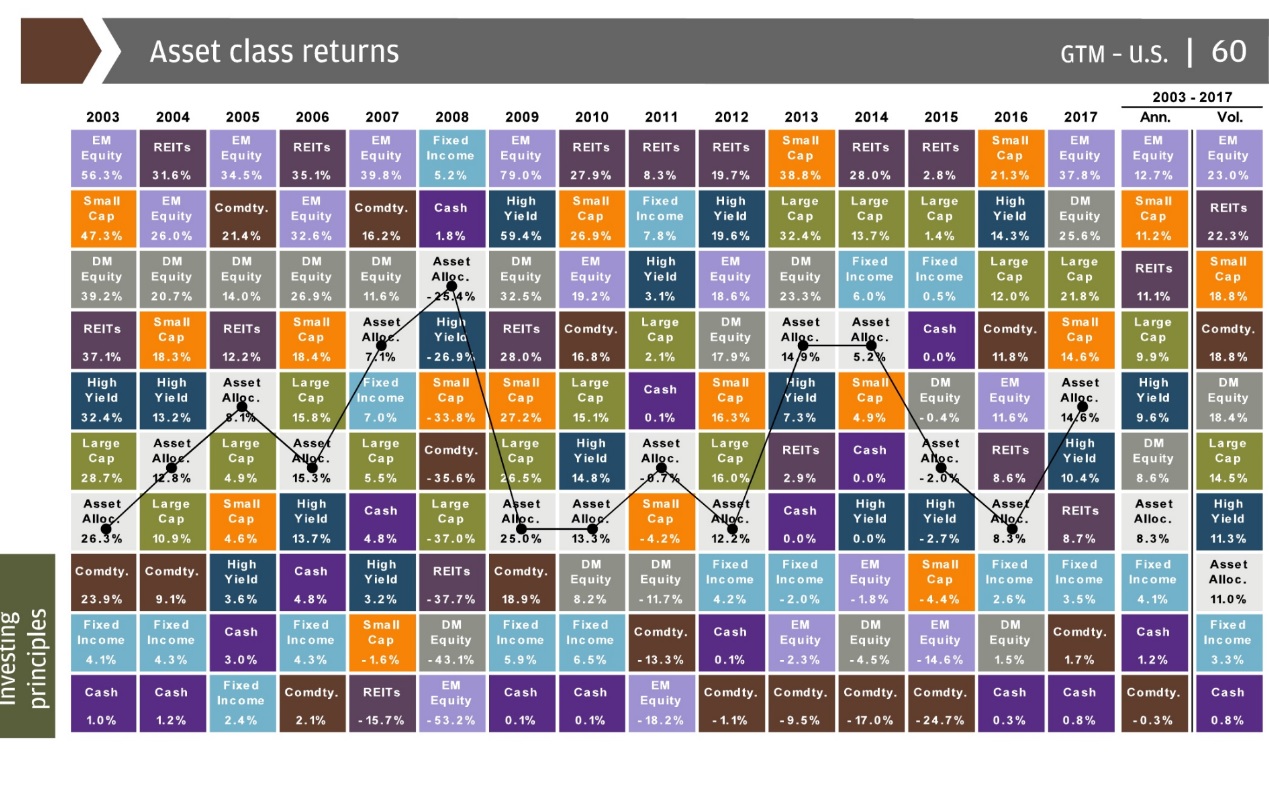 This final chart ranks the best to worst performing asset classes (from top to bottom) since 2003. As you can see, there is no discernible pattern. The grey box is asset allocation and shows you that a diversified portfolio will never be the best, never be the worst, but generally be “good enough” in the long-term.

Overall, we believe there are more positive takeaways than negative ones. Improving global growth and the continuation of accommodating monetary policy are two key drivers that should create an upward bias in equity markets. That doesn’t mean we will never experience a correction, particularly in the U.S., but it does suggest it could be shorter-term in nature.

I would like to close by wishing you a very happy, healthy New Year and to thank you for the continued opportunity to work with you as your financial planner. If you have any questions about your portfolio, or would like to discuss any changes, my team and I are more than happy to help.