How have markets performed in 2022?

While markets prospered under the accommodative monetary policies brought on at the start of the pandemic, it now faces a change in policy. With U.S. inflation at a 40-year high, the market has begun pricing interest rate hikes from near zero to 3% by the end of 2022.  This has caused the price of equities to fall globally by around 19% and for fixed-income to fall by around 10%, because capital has become more expensive and future cash flows are less valuable.

Here are the year-to-date results, as of June 16:

What happened this week?

The market is closely watching and reacting to monthly inflation reports.  On June 11, the U.S. Consumer Price Index (CPI) came in at 8.6%, up from 8.3% the previous month. This is a 40-year high for U.S. inflation, with notable price increases in gas, oil, and food.

Yesterday (June 15), the U.S. Federal Reserve raised its benchmark interest rate by +0.75%, a jump of this size not seen since late-1994. They reported that the move was dictated by the fact that CPI inflation was lingering at an uncomfortably high level of 8.6% and that surveys which measure longer-term inflation expectations were on the rise.

Financial markets initially responded positively to the Federal Reserve’s inflationary resolve, with the S&P 500 closing 1.5% higher on the day. Today (June 16) has been a very different day, with broad-based weakness seen across equity and bond markets. The S&P 500 and TSX closed down 3.25% and 3.1%. With a night to sleep on the Fed’s decision, it seems that investors woke up more concerned about prospective economic growth given that the Federal Reserve’s primary focus is on inflation.

Policy rate expectations are important because the so-called neutral rate, the level of interest rates that are neither stimulative nor restrictive to economic growth, is widely seen as between 2%–3%. At 4%, the Fed policy rate would be in restrictive territory.

Simply put, why is inflation bad for stock markets?

What is the impact to investors?

Given persistently high oil prices and rising rates, the risk of recession has risen, indicated by weakening consumer sentiment stemming from spending being deferred due to financial pressures from gas prices, among other factors. The resulting demand destruction from consumers will ultimately dampen inflationary pressures, which in turn alleviates the need for the Fed to continue to aggressively hike rates. 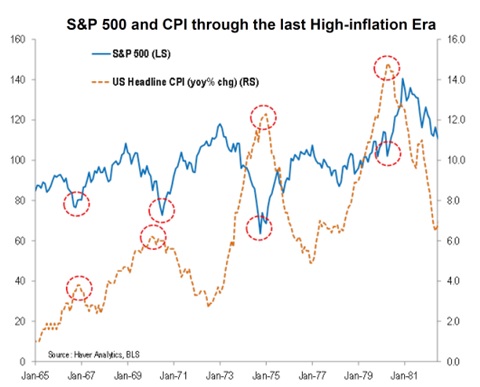 Has this happened before?

The 70s provided a similar backdrop of high inflation and low growth.  We can look back on this decade to gain some insight into how things might play out over the coming months. Each turn lower in CPI inflation was met by a rally in stock prices. Bonds rallied similarly. Historically speaking, it was not so much the level of inflation that mattered for the markets as much as it was the direction of inflation. Inflation rolling over, even from a high level, was usually good news for stocks and bonds during the last major era of problematic inflation.

The S&P has now declined more than 20%.  What happens next?

After all, stock market corrections are when stocks become more attractively priced and the goal of any investor should be to buy low and sell high.

A common definition of a bear market is when stock markets fall at least 20% or more from the last peak. Since 1950, the S&P 500 Index has seen 10 bear market opportunities as shown below. Using daily returns, the table summarizes the start date of the bear market, the date on which the market first declines -20%, the time it takes until markets first decline -20% and then 1, 3, 5 and 10 year returns assuming you invest on the first day the bear emerges (i.e. Bear Sighting). 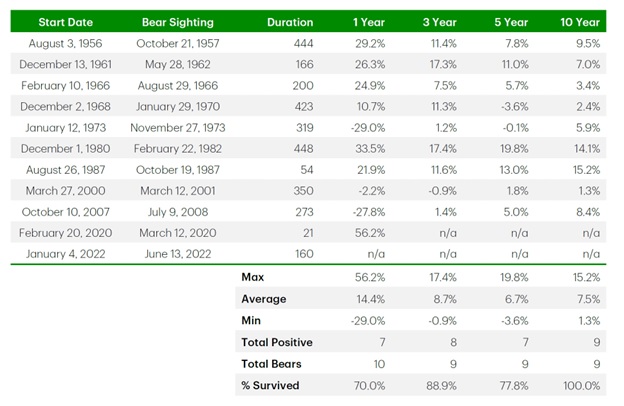 The actions of central banks will continue to figure prominently in the news for a long time as inflation pressures, geopolitical events, and changing economic conditions create uncertainty for investors. Our team is committed to providing you with our insights to help put current events into context for you.  If you have any questions about your portfolio, financial plan, or other ways we can help you, please contact us anytime.