Yesterday, we posted a Special Update on the evolving Russia-Ukraine military conflict. To read it in full, click here.

Today, we’d like to share an additional piece of commentary focusing on the Canadian landscape, courtesy of BMO Capital Markets.

The immediate financial market response to Russia’s invasion into Ukraine was textbook risk aversion—a heavy selloff in global stocks, and rally into the safe-haven of bonds. Energy prices surged  broadly, given that Russia is a big producer and the sector could be the target of Western sanctions. What follows is less clear-cut, particularly as central banks prepare to raise rates (if they have not been doing so already) to stem soaring inflation.

Sorting through the potential economic impact of the invasion, there are at least three major unknowns:

Assuming the conflict does not spread beyond Ukraine, then oil prices become the fulcrum for the impact on the global economy. In turn, assuming that oil prices remain close to $100 for some time, we look at the potential implications on North America’s economy and on monetary policy.

What are the implications for inflation?
This latest run-up in oil prices complicates an already-fraught inflation backdrop. Every $10 rise in oil tends to boost headline inflation in the U.S. and Canada by roughly 0.4 percentage points. And note that January’s already-lofty readings – 7.5% in the U.S. and 5.1% in Canada – had not fully taken on-board the rise to $90 oil, let alone $100. (WTI averaged $83 in the month.) Thus, if prices hold at current levels, or head higher, this factor alone could bump headline inflation by roughly 0.6 ppts. 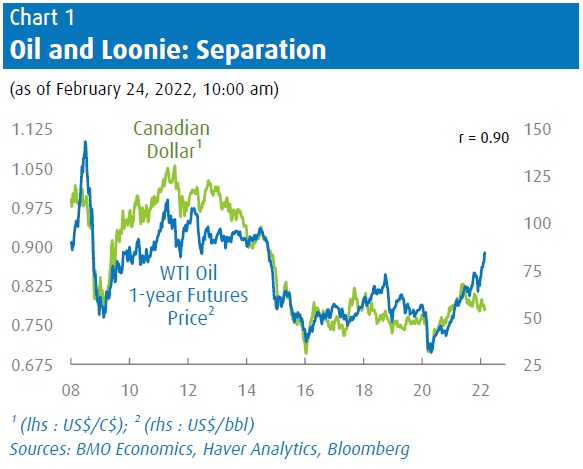 Complicating matters is that the Canadian dollar has not benefited one iota from the rise in oil prices in 2022, in contrast to the previously tight relationship between the loonie and crude (Chart 1, above). While good news for domestic producers, this implies that Canadian consumers are facing the full force of higher global oil prices, unlike earlier crude price spikes.

What are the implications for Canadian growth?
The most important impact on Canada’s economy from the developments in Ukraine is through the commodity price channel, and specifically through the rise in oil prices. Given that Canada has precious little direct trade or investment with Russia and/or Ukraine, the major economic driver is thus oil prices.

Typically, as a significant net exporter of crude, moderately higher oil prices are a small net positive for the Canadian economy. Normally, the big gains for producers outweigh the hit for consumers. However, there can be too much of a good thing, particularly if the rise in energy prices weighs heavily on the global economy and rebounds back onto Canadian exports in other sectors. This rapid rise in energy prices risks doing just that, especially at a time when consumers are already rattled by rising inflation. At best, this broad-based rise in commodity prices is neutral for overall growth, and may even tip over into being a moderate drag, given the shock to consumers and the sentiment-damaging effect of the invasion.

What are the implications for the Bank of Canada?
Russia’s invasion isn’t expected to have a significant impact on the Bank of Canada’s broader views on the outlook. While speculation of a 50 bp hike next week should be put to bed, the domestic backdrop and fiery inflation still demand rate hikes from the BoC. We continue to expect a 25 bp hike at the March 2 meeting, likely the start of a series of moves. Indeed, the sharp move higher in energy prices only reinforces inflation concerns, though there’s the added layer of growth risks as well due to the extent of the increase in oil prices and because of the Russia/Ukraine conflict itself. We’re not changing our forecast for the BoC, but uncertainties have ramped up.

While we firmly anticipate at least a few initial rate hikes, if this conflict drags on, keeping upward pressure on energy prices and weighing on global growth, the end point for policy rates becomes the bigger question. Until we get more information on the extent of sanctions that will be imposed on Russia, it’s difficult to assess the medium-term impact on the Canadian economy and policy. However, the risks appear skewed to a lower end-point for policy rates until this conflict quiets.

Will these events affect Fed policy?
The Fed is poised for policy rate liftoff on March 16, reflecting a pressing domestic inflation problem. With Russia and Ukraine being major producers of wheat, corn, oil and natural gas, both global and U.S. food and energy prices are going to potentially face another inflationary impulse. With the Fed already being perceived as ‘behind the curve’, we doubt these events will stay the Fed’s hand next month. However, current weakness and volatility in global financial markets, along with increased global economic risks, will at the very least, likely temper some of the most aggressive calls on the Fed (e.g., a 50 bp hike). Follow-up moves in May and June (which we expect) are at greater risk of being temporarily postponed. Recall the postponement of subsequent rate hikes after December 2015’s liftoff owing to “global economic and financial developments”. Much will depend on the European economic consequences of the current conflict and its potential escalation. At this point, we remain comfortable with our call for 125 bps of total rate hikes this year, in this very fluid environment.

Does it alter the Canadian regional growth picture?
We expect Alberta to outperform the national average with 4.4% growth this year, and lead the country at 3.8% in 2023. There is a rekindled optimism in the province that only $100 oil can create. While a capex boom in new project development is not likely, as seen earlier in the 2000s, industry cash flow and local incomes will be well-supported.

Alberta’s jobless rate should converge back down toward the national average over the forecast horizon, after struggling with a soft labour market in the years leading up to the pandemic. That said, we don’t see an extreme disparity in growth versus regions such as Ontario and Quebec, which will also remain drivers.

Will it boost government revenues?
Alberta, Saskatchewan and Newfoundland & Labrador are positioned for good-news budgets this spring. (Alberta’s 2022 budget just happens to be due later today.) While a surge in oil prices on the back of a geopolitical event likely won’t alter medium-term budget planning assumptions, it just reinforces near-term upside in revenues. Alberta’s latest FY22/23 $3.3 bln deficit estimate was based on $64 WTI. Every $1 increase adds roughly $230 mln in revenue, and that relationship strengthens as prices rise and more projects reach payout status. Suffice it to say that we could see surpluses.

Credit spreads in oil-producing provinces have already compressed. Alberta 30-year spreads have narrowed to the tightest level in almost three years versus Ontario, about 4 bps back. Note that the last time Alberta ran a balanced budget (FY14/15), Alberta 30-years traded about 20 bps through Ontario.

Federal government revenues will also benefit from higher incomes and nominal GDP, but could be dampened if the surge in oil chokes off other discretionary spending and growth. Our current forecast assumes nominal GDP growth at least a full percentage point stronger than Ottawa assumed in the fall fiscal update, for 2022 and 2023, so there likely some modest upside on the revenue front.

The move extends the risk-off and inflationary tones to the market, and Canada has proved to be a relatively good hiding place. Energy directly accounts for 15% of the TSX index, versus 3.5% for the S&P 500. The TSX has also proven to perform relatively well against inflationary forces, helped by its larger exposure to commodities. Against a backdrop of monetary policy tightening, the TSX has found a strong niche thanks to more exposure to value-oriented dividend-paying equities, and less exposure to highflying technology where valuations are a concern in this environment.

If there is one lesson from looking at past geopolitical conflicts together as a group (and they are all different to be sure), it is that they usually prove to be noise in the bigger picture that is ultimately shaped by the economic and monetary policy cycles.