In light of the escalating conflict between Russia and Ukraine, we would like to provide some context, courtesy of Dynamic Funds’ Chief Investment Strategist, Myles Zyblock.

Russia launched a broad-based attack on assets in Ukraine over night, and there have been follow-up reports of intense fighting continuing into the morning. Most world leaders have condemned these actions and are planning to impose a package of further “massive” and “targeted” sanctions on Russia. The MOEX Index, a cap-weighted composite of the most liquid Russian stocks, is down by 35% today. It is very difficult at this stage to gauge what this might mean for the world economy. The duration of the conflict and the reaction to it from world leaders will play important roles in determining the future dynamics for inflation, economic growth, and asset prices. During this period of heightened uncertainty, we expect that financial market volatility will remain elevated and the short-term flight to safety will continue. Gold bullion, the U.S. dollar, and government bonds represent some of the vehicles likely to be used by investors as a place to park money until more of these unsettled questions are resolved. 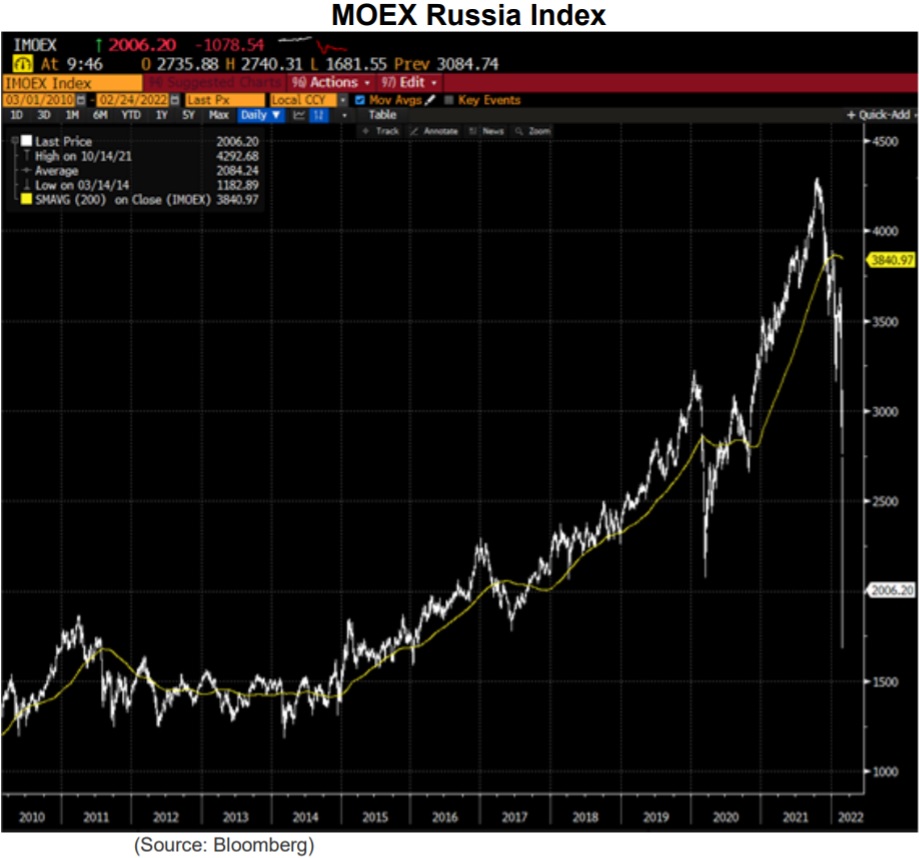 Earlier this week, the Russian government announced that they were officially recognizing Donetsk and Luhansk, two self-proclaimed separatist republics in eastern Ukraine. The decrees signed by Russian President Vladimir Putin also included an order to send “peacekeeping forces” into these two breakaway regions. The move generated disapproval from the United States, European Union and other nations who spoke at an emergency meeting of the United Nations Security Council on Monday night. The actions were seen by most member nations as a break from the 2014 and 2015 Minsk agreements and an unprovoked violation of Ukraine’s sovereignty and territorial integrity. Among the major nations, China has been the outlier by stopping short of condemning Russia’s latest actions.

• The U.S. issued an executive order prohibiting investment, trade, and financing to separatist regions of the Ukraine;
• Germany has placed a halt on the Nord Stream 2 gas pipeline from Russia;
• Britain is restricting the activities of several Russian banks;
• And, the European Union has proposed an initial package of actions targeting Russian individuals behind the decision as well as the banks that finance operations in the Ukrainian territories.

Most nations allied with the West have reported that more measures will soon follow.

Russian financial markets have been under pressure since late last year alongside mounting tensions with the Ukraine. Russian sovereign CDS (the price of sovereign risk) has spiked, the Ruble has weakened, and their stock market has tumbled lower. The latest surge in these geopolitical risks have become more evident in global asset markets in recent weeks as expressed by the new high being made in Brent oil, the sharp climb in the price of gold bullion, and the fresh bid seen for longer-term U.S. Treasury bonds.

Investors were already grappling with uncomfortably high inflation and the prospect of central bank policy tightening. The current geopolitical climate is an unfortunate pile on factor. In a rather counter-intuitive manner, however, geopolitical flare-ups have typically led to shallow and transitory weakness in the major stock price indexes. Looking historically at major geopolitical events back to World War II, the median selloff for the S&P 500 has been -6% that spanned a period of 16 days. 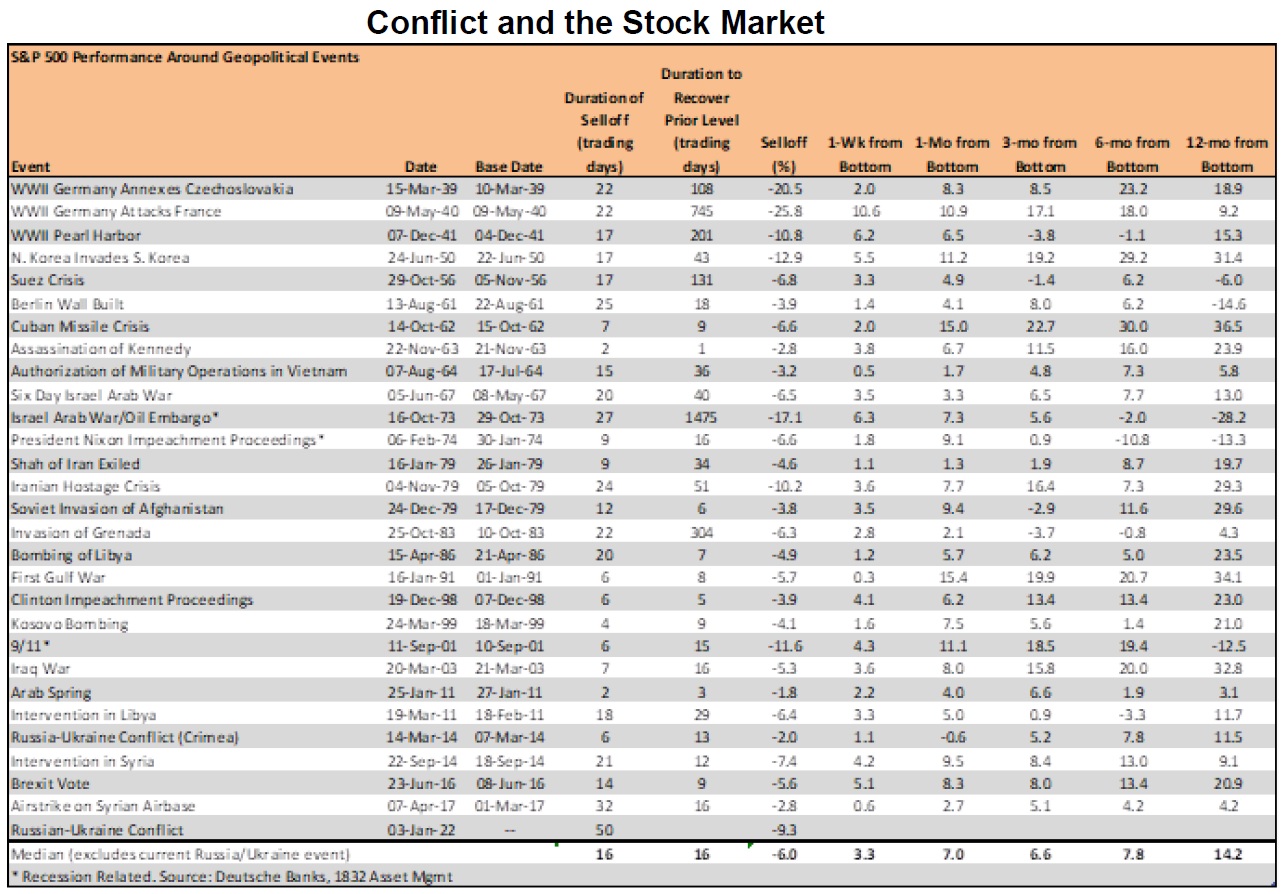 Financial conditions are tightening with volatility spiking, credit spreads widening, and safe-haven currencies catching a bid. Central banks have remained quiet thus far, but the current geopolitical dilemma might encourage a slower pace of future interest rate increases from the world’s monetary authorities. Admittedly, a great deal of uncertainty has already been absorbed by the financial markets but there is no reason to expect a sustained asset price revival until we get some additional clarity on geopolitics. This suggests that volatility will remain elevated while the lower quality assets extend their period of underperformance.

As always, we encourage you to reach out to us with any questions you may have.